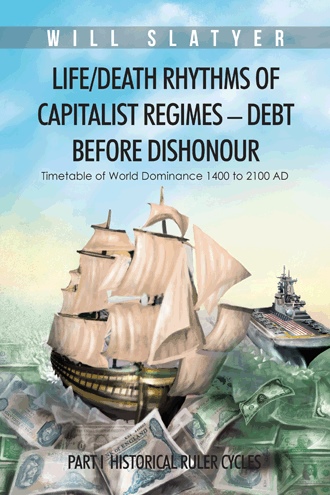 Common Features of Dominant Cultures I will summarise the areas which I have determined produced just, enduring dominant cultures. This summary will no doubt be criticised as superficial, but often, in order to present a “big picture” view of millennia, one cannot focus on detail. All dominant cultures have had access and or control of large regions and their resources, often through military dominance from a small base. Although dominant rulers since 3000BC varied from emperors to kings they were all warriors who ruled in war and peace through competent bureaucracies. The ruler needed to be strong and respected enough to attract a loyal noble or ruling class which could control a competent army. There needed to be competent successors after the great ruler to provide enduring dominance. Popularity with the lower classes who produced agricultural wealth was an advantage but not essential. The modern democratic models look to have followed the same pattern where strong leaders can produce an economic surplus which can support a strong military force. The introduction of political parties has also produced weak coalition governments or, in the case of the USA, a gridlock between the President and Congress, which weakens government. This tends to follow the same pattern as weaker successors to a strong ruler of a dynasty. Religion provided the cement which allowed a culture to be united in dominance. Although many cultures had a sole religion, others were tolerant of regional religions provided the cohesion of empire was not disturbed. When that tolerance allowed the introduction of too many religions or when factions of the dominant religion became fractious, the empires were often already in decline. The Capitalist era saw cultures weaken when sects of the one religion (Catholic -v- Protestant, Shi’a -v- Sunni) or different religions (Muslim -v- Christianity) developed into violent opposition. Such religious fractures also can prevent cultures from becoming dominant. Technology was used to advantage by all dominant cultures especially in warfare. The common factor that can be identified is that it was often not the dominant culture that invented new technology. The dominant cultures had the infrastructure which enabled them to improve on past technology and adapt the new technology of others to suit their own purposes. The British Empire did invent technology to commence the Industrial Revolution but innovation stalled as the dominance declined. The USA is following a similar pattern. Law was important to dominant rulers, because large domains could be controlled with the rule of law properly administered. The rulers promoted traditional laws but allowed changes as suggested by their administration. There was a tendency by rulers to interpret laws to favour their own political will but generally rulers were wary about any favour that disrupted an orderly society. The increase in the number of lawyers in the Capitalist Era has not improved the rule of law. In fact the political need for a democratic government to continue to create new laws, and freedom of expensive lawyers to litigate at great cost, appear to have impaired the rule of law for the middle and lower classes. The rise of empires in the ancient and medieval world was nearly always as a result of military success. The enduring dominant cultures were able to govern the conquered areas in peace or at least those areas which were not threatened by opposing forces. The succession of rulers was most important. When a weak ruler appeared, orderly rule tended to break down so that leaders lost the support of strong nobles and supporters who acted in their own self interest. The empire was thus weakened from within, allowing a contending dominant culture, internal or external, to encroach on territory and maybe takeover the resources necessary to rule. Dominant cultures were generally not subject to military loss of empire to opposing cultures, without first suffering internal economic weakness. As its name suggests the dominant cultures of the Capitals Era have been dependent on strong economies with a good financial base. A noticeable factor of the Capitalist Era has been the increased cost of maintaining and operating military forces with modern weapons. The cost of war has become prohibitive and not able to be recouped from gain of territory. Thus debt from war was become a factor in the decline of a dominant culture. 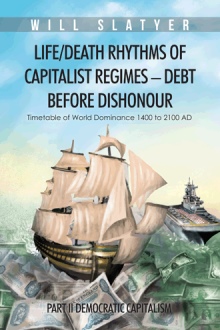 Life/Death Rhythms of Capitalist Regimes – Debt before Dishonour
Will Slatyer
$20.95 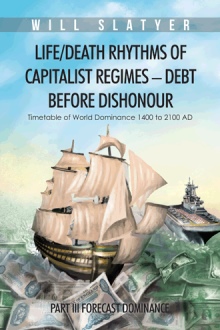 Life/Death Rhythms of Capitalist Regimes – Debt before Dishonour
Will Slatyer
$23.95 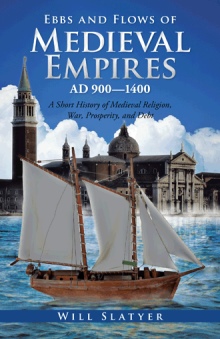 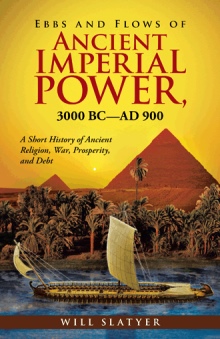 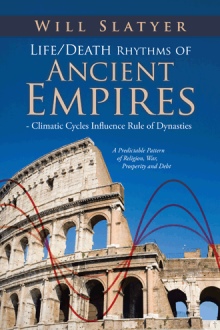 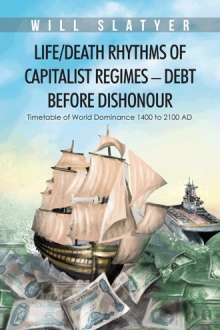 The Life/Death Rythms of Capitalist Regimes - Debt before Dishonour
Will Slatyer
$40.00

Life/Death Rhythms of Capitalist Regimes–Debt before Dishonour explores the cyclical theory of cultural development, with particular attention paid to the introduction of democratic forms of government in the British Empire and the United States republic. The cyclical theory allows a forecast of the fading of the dominance of the United States as an imperial power. Part I provides the abbreviated historical background from 3000BC to AD1400. Similar to cultural survival of the loss of dominance experienced by the British Empire after the Great War, the United States will survive in a new form. Which superpower will take over the reins remains to be seen, but the likely contender is the People’s Republic of China. This conclusion and the timing will allow long-term planning by corporations and governments. In the age of political correctness, it is unlikely that readers will experience any such forecasts by government bodies. Throughout history, societies have used and abused debt, revolted and warred over debt, and have forbidden usury. But the modern financial world as we know it simply cannot exist without usury. Since the 1400s, modern governments have found new ways to expand debt to produce modern economies, which are still subject to the age-old basic principle of debt—that it needs to be repaid or dire consequences ensue. “Those who cannot remember the past are condemned to repeat it.” —George Santayana (1863–1952)

Will Slatyer offers a lifetime’s experience in international studies through his varied careers. Sparked by the ideas of an American professor, Will has spent over ten years proving that dominant cultures (empires) of the world obey a cyclical framework influenced by climate change. He resides in Narrabeen, New South Wales, Australia.