PLOG IN THE LAND OF H2 OF O 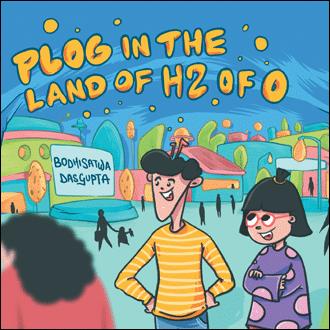 POH!’, Plog screamed. ‘PLOG!’, Poh screamed back. ‘Where are weeeeee?’ Plog screamed again, matching Poh’s octave. If Plog had opened his eyes, instead of keeping them closed, Plog would have realized that there was absolutely nothing to be scared of. Because both Plog and Poh were sliding down a rather watery slide to somewhere. And it could have been just an ordinary slide, had it not been attached to a puddle on the street that Plog and Poh fell into. PLOMP! Both Poh and Plog landed on something that appeared to be like blue jelly. Getting up, Poh dusted her bums off, just in case some jelly stuck to them. ‘Poh’, Plog said, as his left ear twitched, ‘Do you think the puddle WAS the gate?’ Poh shrugged and helped Plog get up. In front of them, for as far as they both could see, there was a maze of pipelines. Some pipes were blue, some were red, some were yellow and some were polka dotted. Some were high, some were low and some were slanted. And all these pipes connected with one another.

Plog is not an average boy. To put it plainly, Plog is half alien, half human, and wholly curious. He lives with his mum, Dee and two cats who stick to her. Plog's dad, #Zok is floating around somewhere in space and (even though he doesn't like to admit it to Plog), is quite lost. Plog wants to know where water comes from. Legit question. Unfortunately, to find this answer, Plog must travel to lands he's never heard of before and meet people he won't ever forget. Join Plog as he travels to the land of H2 Of O.

Bodhisatwa has a daughter. And most of the writing he does outside advertising, is for her. Bodhi's passionate about words, about sentences that go absolutely nowhere and about ridiculous names (some of which you'll find in the book). Bodhi is part man, part child and part unicorn. Who he will be tomorrow is anybody's guess.