Pichwais: The Manifestation Of Pushtimarg 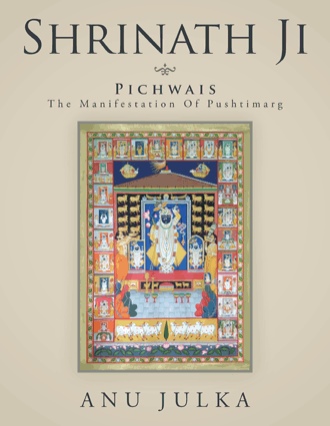 The moon has inspired art, literature and music over centuries. Pichwais, specializes in Krishna Leela, depiction of which is incomplete without moon as a motif symbolizing love and longing between the devotee and his lord. The yearning for moon has been reflected in all cultural forms whether it is in legends, myths, songs or folklore, the moon is a symbol that appears again in our collective subconscious. The moon is cool in nature and Krishna has the same serene temperament. Simple example is Moon and its sixteen kalas the more kalas moon has the more it is shining. The moon is there but the ansh of light it is reflecting is its kala. Sixteen kala moon is full moon. So a physical appearance of god reflecting the light ansha is his kalas. Shri Krishna was full moon. That way Krishna was simultaneously awakened in Jiva consciousness. God consciousness and Brahm(Turiya) consciousness . Made on cotton or silk each Pichwai creates the mood of a specific season or festival. It's a brush with nature and divinity.

This book is about the Pichwai paintings, which have been in practice for the last three hundred years in Vallabhacharya Sect temples of Lord Krishna. These paintings portray Lord Krishna. Lord Krishna as a child is shown in different moods, attires, and postures. Painting Pichwai is an ancient form of art passed on from generation to generation, and it has a devotional theme toward Lord Krishna.

Anu Julka basically belongs to North India. She was born to a Hindu Kshatriya family in Punjab. She spent her childhood there. She received Bachelor of Information Technology (IT) , Master of Computer Applications (MCA) from Punjab Technical University and M.A(English) M.A(Hindi) from Lovely Professional University India. In 2008 she got an opportunity to do research on Pichwai Paintings with a prestigious college of Punjab. The experiences during the research work brought tremendous changes in her life, which motivated her to write this book. Author can be reached at julkaanu@gmail.com