MAHATMA A SCIENTIST OF THE INTUITIVELY OBVIOUS 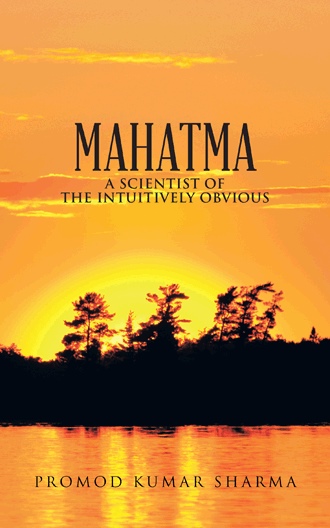 Mohandas Karamchand Gandhi started with himself. He started with correcting his own mistakes. He continued with it till he died. At some junctures in his life he felt that millions and millions of people were suffering because of the mistakes committed by our ancestors. He felt ashamed and vowed to serve selflessly all those who suffered due to selfishness of others. Just as most of the human beings believed in the God, Gandhi also had faith in Him. He agreed with the wise people of exemplary character who had concluded from long experiencing and deep contemplation that the God has provided enough for survival of all animate or inanimate that existed in this world. He also agreed that if all living beings drew from the wealth the nature (or the God) owned, only that much as individually needed by them, leaving the rest for others’ use; there would not be any shortage for anybody, and all would be contended. Gandhi very humbly accepted it as ‘workable’ or ‘practical’ truth. The knowledge that this ‘practical truth’ as well as many other practical truths were not firmly settled in human societies, disturbed him; but his faith in God convinced him that some kinds of divine laws and orderliness existed in the universe. His faith in God and commitment to humanity inspired him to devote his life to converting what was ‘ideal’ into practical. A strong desire to explore and realize absolute truth made him carry out his experiments with truth. The field he chose to carry out his experiments constituted the human race that suffered, and the primary tool he used to carry out his experiments with truth, was selfless service. Gandhi was quick to realize that the biggest cause of human suffering was human violence; the violence of mind, words and deeds. The root cause of any violence is fear. The thought of one’s limitations and inadequacies instills fear in one’s mind. When animals are afraid, they attack or runaway. A man who does not know how to handle his fear may also do it. He may act violently or he may suffer timidly. Gandhi observed and experienced that man used violence as a tool to serve his insatiable desires; and he also used it to counter those who violently deprived him of what was rightfully due to him. Gandhi questioned; if violence is not acceptable for it caused harm, how could it be accepted to counter violence? Today’s generation knows Gandhi as a politician who helped India in attaining freedom from British rule without using any violent means. It is true that Gandhi played an important role in India’s freedom struggle, but that was an insignificant part of the contribution he actually made for the cause of humanity. Gandhi’s only occupation was to serve humanity selflessly and his objective was to explore as to how selfless service can be developed as a tool (Sadhan or means) for reducing suffering and pains of mankind that were primarily caused by human violence. Non-violence is, causing no harm. Man can harm another man by violent means only. It is generally believed that violence means hurting someone physically. This definition may be good for a child who has started learning a language. Violence actually means, depriving a fellow human being of his happiness, for fulfilling one’s selfish desires. If we accept this refined definition, we find that about one tenth of the people of the world, knowingly or unknowingly, have deprived rest of human population of their happiness using violence of any kind whether mental, verbal or of their deeds. Gandhi carried out his experiments honestly, diligently and transparently; gaining knowledge from all possible sources, improving and purifying his conduct constantly, rectifying his own errors, speaking and writing about his experiences and inferences. He covered all that influenced modern man. Wars, democracy, freedom, religion, caste and class systems, society, education, status of women, right livelihood, human development, scriptures and human conduct; there was virtually nothing that he left out. The book has relied only on Gandhi’s words to arrive at what he was aiming at. It says that Gandhi viewed the world on ‘as is where is’ basis but tried to experimentally verify a theory that has potential to change completely the history of mankind and making the world a place worth living in, even for the most wretched human beings. The writer urges his readers to understand Gandhi themselves, instead of praising or discarding him on the basis of the opinions that have been floating about him. The writer feels that those who were apprehensive of possible damage to their self interests branded him as a saint who was unfit to handle the ‘practically dirty’ world; and those for whom Gandhi devoted his life respectfully believed in the sainthood of “Mahatma Gandhi” and enjoyed the comfort of their eternal hopes and timidity, they were accustomed of since time immemorial. But, that definitely, is not what the writer concludes with his ‘non-intellectual’ arguments.

Human violence is biggest cause of human suffering that man alone, not even God, can avoid. Killing another human being is most insignificant part of total quantum of violence perpetrated by mankind, at least in modern age. God takes care of human beings. Having faith in God is meaningless unless we human beings do not take care of humanity. It is difficult to say whether many practical truths that serve the universe well, get unified to become absolute truth or it is the other way round. This however is certain that source of all truths is universal intelligence, not yours or mine, that has God’s blessings. Man’s Dharma is to explore the truth, internalize it and to conduct himself accordingly. This, in author’s opinion, was the hypothesis based on which Gandhi carried out his experiments all through his life and established a theory that has the potential to become a universal law. The book arrives at the theory using Gandhi’s words and author’s interpretations; and no third opinion. The author says, “It, at best, is a manuscript in printed form that shall become a book only if it generates at least some thought action from its readers.”

The author’s father was a follower of Gandhi who encouraged his son to think independently and study science. Promod Kumar Sharma started writing at the age of ten and continued till he graduated as an engineer from I. I. T. Kanpur. The authors he liked in his college days were Ernest Hemingway, Maxim Gorky and Munshi Premchand. He discovered that modern education provides information and knowledge but filters away wisdom. Promod enjoyed exploring and experimenting. He spent major part of his life as a successful technical entrepreneur but a financial struggler. At the age of 64 now, he studies scriptures, teaches physics and experiments with education. Promod speaks very little; and virtually nothing about himself. He said, “One learns from life, but only when he has true sense of justice and tries to live on his own terms. Making use of one’s intellect for exploration, analysis and drawing inferences is fine but conclusions must come from heart.”