On Life’s Little Twists and Turns 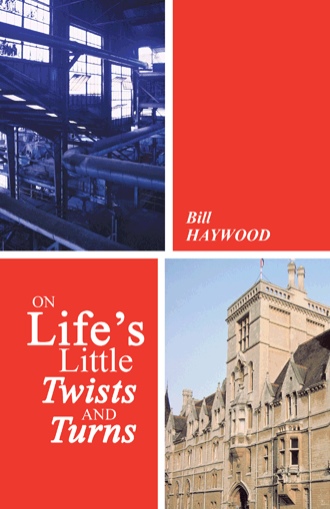 Bill Haywood, an English, working-class, Black Country lad, saw only a lifetime of factory drudgery as his fate when he was young. He left school at fifteen without any academic qualifications and entered the workforce with various engineering companies. For five years, he served in the Royal Air Force in the United Kingdom, Cyprus, and Malta. After his service, he was hired on at one of the largest engineering companies in the UK—Guest, Keen and Nettlefolds. At the age of thirty-six, while still working at GKN, he threw caution to the winds to attend Ruskin College, Oxford, to pursue a dream. At the age of thirty-nine, he earned the first of three university degrees, culminating in a doctorate at the age of forty-five. In this memoir, he expresses strong views that may challenge those who are unwilling to debate the issues, including the environment for education and the social situation in the UK, the apparent goals of the current government, and sport and sportsmanship. He has traveled the world and befriended interesting and stimulating people from places he never thought he would see with his own eyes. His is a journey of discovery, proof that life holds great potential for those who are willing to look beyond their immediate environment or circumstances. He hopes to encourage others to seek something beyond their current factory, office, or shop door, where a more satisfying future may await.

Bill Haywood left school at age fifteen and worked for two decades at various engineering companies and with the RAF. He then returned to university in his mid-thirties and obtained his BA, MSc, and DPhil degrees. After a career working for national and international organizations, he retired and moved to Cyprus. On Life’s Little Twists and Turns is the story of his progression from factory to academia.