The Book of Letters

The Basic English Letter sounds as used around the world 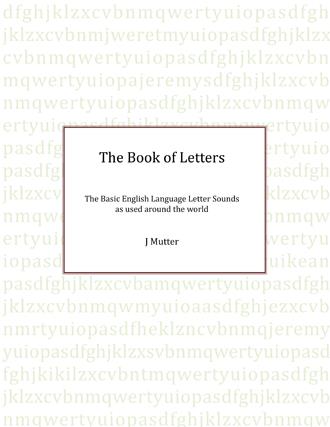 Basic English Language Letters Sounds (BELLS) Having learnt to recite the Roman alphabet as used for English, a ‘student’ might feel fairly confident that the task has been mastered. A student of course can be a native English-speaking toddler, or a non-English speaker wishing to learn the language. The ABC is learnt in all corners of the globe from China to Timbuktu with varying degrees of success. In general, it is mastered admirably because it is the ‘names’ of the letters we are learning, and not necessarily how they will sound in a word. We spell the word ‘word’ ‘double-you-oh-are-dee’, but that is certainly not how it is said! So, having learnt to say the twenty-six letters we find the need to learn how to use them in words. Native speakers of any vocal language, always learn their ‘words’ aurally. They hear a word and repeat it. How it is spelt or written down is initially of no interest. The majority of the world’s languages are never written down. I believe any language whether it is a first or second tongue, is best learnt by listening to a native speaker and copying speech. Unfortunately, this is not always possible. We could not learn Latin this way, as there are no native speakers left! Therefore, we must rely on the secondary medium, which is called ‘writing’. We now find that we have more than 26 letters. The shapes of the lower case letters are invariably different to the CAPITALS. This is not a hindrance, but needs to be considered and can help with pronunciation. The word ‘I’ for example is always said as the CAPITAL sound like the word ‘eye’. The letter ‘i’ is usually said differently as in the word ‘in’. ‘Writing’ would best be written without a ‘w’, and so would ‘written’, and it is these quirks of the English language that present the first hurdle when trying to learn to speak from the written word. The ‘sounds’ must be learnt too. Apart from the odd words like ‘odd’ which has two ‘d’s apparently just for fun, and ‘daughter’ which has a ‘gh’ which is not said, it is possible to hear and use sounds within letters themselves. Letters have built-in sound In English, most letters have more than one sound associated with them. For example in the word English we do not say the E as an E [ee], nor [e], but [i]. This is not a matter of ‘accent’. All English-speakers say English as [inglish]. Sometimes we notice different ways of saying a word like ‘tomato’. In North America, it is said ‘tomayto’, but the similarity of the five other letter sounds is far more interesting. The first letter ‘t’ is said the same everywhere at the beginning of a word. So is the second letter ‘o’: But it is not said as ‘O’ as in ‘so’. It is not said as ‘o’ as in ‘hot’, nor ‘o’ as in ‘lose’, but it is said [uh]. It cannot be an accident that the second letter is said the same in Texas as it is in Teddington. Of all six letters in the word ‘tomato’, the majority have received no alteration and have been carrying their built-in sound faithfully around the world. 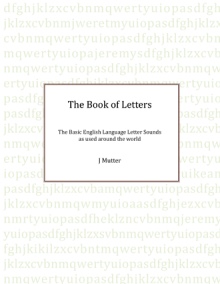 ‘The Book of Letters’ is an exciting new approach to examining the letters of the alphabet used for English, showing the reader that there are ‘sounds’ built into many letters that have been inherent for hundreds of years. There has been a lack of information regarding how to say words from text, and why we say words the way we do. The word example for example, has a sound between the consonants in the second syllable. Where does it come from? How do we say this word the way a native speaker would do? ‘The Book of Letters’ examines this, provides the answers and offers students of the language a method of learning to say them in an understandable way. It is different to any previously published available work in that it uses traditional sound representation combined with a simpler and more understandable system, to show sounds that have hitherto been ignored or at best poorly represented. The novelty here is that it approaches an academic subject, in a light-hearted readable style. The book covers every aspect of alphabet letters as written for English to include their history, shape, varieties, sounds, uses, and the consequence of joining one letter with another.